It is with great sadness we announce the passing of sweet beautiful Cinnamon (Cece).  She fought Leishmaniasis very hard, but this disease is quite brutal, and her little body could no longer fight.  Thank you to her fabulous foster family and the SNORT family that helped throughout this journey.  She will be missed.

Cece (as she is affectionately called) was having some medical issues and her S.N.O.R.T. foster family could see she was thin, her paws were swollen, and she had an enlarged lymph node.  She had ultrasounds, was treated for allergies and IBD but nothing seemed to work or make sense.  From tick panels to ATCH stim, she had it all done. Her blood work pointed to kidney failure. The S.N.O.R.T. team had the veterinary specialists start treating her kidneys, removing the lymph node and took biopsies of her feet which were sent to the University of Pennsylvania.  This little girl was a mystery and everything was being done to figure out what was wrong and treat her.

The University of Pennsylvania reached out and said they had an idea what it was, but they needed deeper biopsies of her feet because they wanted to be sure.  S.N.O.R.T. decided that even though no one wanted to put her through more testing, it was important to get to the bottom of it to hopefully have answers and help beautiful Cece live a quality life.

The results came back….Cece has Canine Leishmaniasis.  Our first question, including the Veterinarian was – what is that?  Canine Leishmaniasis or Leish, as it’s commonly called,  is a vector borne disease caused by a parasite and transmitted by female sand flies, found in Southern Europe and Mediterranean countries.  It is not found/transmitted in the United States.  How in the world did this sweet girl from New Jersey contract this disease??  The S.N.O.R.T.  team jumped into action and tracked down someone who knew her previous life and what we learned was no surprise.  CeCe was imported from Spain!  BINGO.

The S.N.O.R.T.  team quickly researched and found some amazing people in the UK who are extremely familiar with the disease and treatment.  Leish is treatable but not curable.  It needs to be monitored & treated for the dog to have a good quality of life. This diagnosis left everyone shocked and scared.  If you google Leish, all the information you find is not all true.  So, The S.N.O.R.T.  team consulted the experts and started her treatment.

Today, CeCe has gained weight, her kidneys are stable and her feet are normal.  She is a happy, sweet, silly Frenchie who loves life as her forever foster mom’s copilot!  CeCe requires frequent blood work to monitor her kidneys and Leish.  She is also on multiple daily medications to help support her kidneys, as well as supplements and probiotics.  She is on a prescription diet as well.  It is important to share her story as more dogs are being imported into the United States. Education is power and S.N.O.R.T. wants everyone to know what to look for when perhaps similar symptoms appear.

S.N.O.R.T. prides itself on providing THE BEST medical care possible and in this case,  it made the difference between hospice and a happy, healthy life! As a forever foster, there are many costs associated with her care, so Cece would love to have you as a donor or virtual sponsor, just click on one of the donation tabs above.

More of Our Dogs 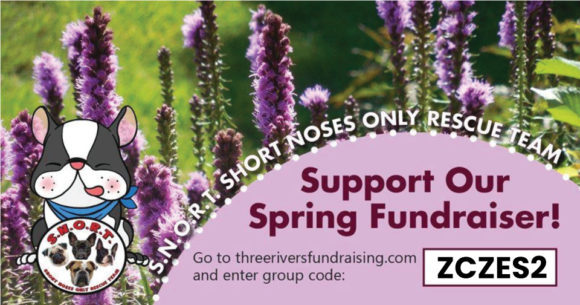